Learn more About MKWD! Our Mission, Vision, and Values!

The original water supply system of the Municipality of Kalibo was constructed by the Department of Public Works and Highways sometime in 1960 and operated by the now-defunct National Water Works and sewerage Administration (NAWASA) until 1976. The Sangguniang Bayan Kalibo passed Resolution No. 15 dated July 29, 1976, for the formation of the Water District. On September 28, 1976, the 5-member Board of Directors representing the various sectors of the society, namely: women, educational, professional, civic, and business organizations were appointed by then-Mayor Federico Icamina, hence, the district was born.

On January 30, 1979, Local Water Utilities Administration (LWUA) issued a Certificate of Conditional Conformance (CCC) No. 73 and since then, Kalibo Water District was subjected to the provision of Presidential Decree 198 otherwise known as the Provincial Water Utilities Act of 1973.

There was a time during its infancy stage that the operation and salaries of employees of the Kalibo Water District were subsidized by the Municipal Government of Kalibo, until such time that it has availed of technical and financial assistance from LWUA by way of loan. The water district was the recipient of a loan package from LWUA in the amount of Php 4.8M sourced from USAID for the construction of Phase I Intern improvement Program for source development and expansion programs.

On March 12, 1992, the entry of the judgment of the Supreme Court ruling in the Davao City Water District, et al. vs. CSC and COA declaring all water districts as Government-Owned and Controlled Corporation (GOCC) started the transition of water districts from private character/operation to government character/operation hence, under the mandatory regulations and supervision of various government agencies such as Commission on Audit, Civil Service Commission and other government agencies directly involved in the water district operation.

As the annexation of the Municipalities of Banga and New Washington was accepted on September 5, 1991, and March 5, 1992, respectively, the water district availed of Php 140.0M loan from LWUA sourced out from JBIC (formerly OECF) to finance its Phase II Improvement Program completed on 1999. The water district, being consistent with its mandate, was officially re-categorized from medium to big water district in February 1996. With the annexation of another nearby town in view and the various expansion projects accomplished, the water district was renamed to Metro Kalibo Water District (MKWD) in March 2002. The annexation of the Municipality of Balete was approved on March 25, 2002. With the progress and development, the district has so far accomplished, upgrading of Metro Kalibo Water District (MKWD) from big water district category to large category was approved in August 2003. On February 12, 2007, the annexation of three (3) barangays of Batan namely Camaligan. Magubahay and Caiyang (CAMACA) were approved.

By keeping with good management practices, the Metro Kalibo Water District (MKWD) received various awards such as Outstanding Water District of Years 2003, 2005, 2006, and 2007 in the Large Category both in the national and regional levels.

To support the continued expansion of its service coverage area, the district has implemented the construction of a 1,000 cubic meter Elevated Steel Ground Water StorageTank at Estancia, Kalibo which is now operational.

In May of 2015, the Datem Water, Inc. commenced the delivery of bulk water supply treated with ultra-filtration technology. The facility has a capacity of 10,000 cubic meter per day designed to provide filtered water to the people of Kalibo. 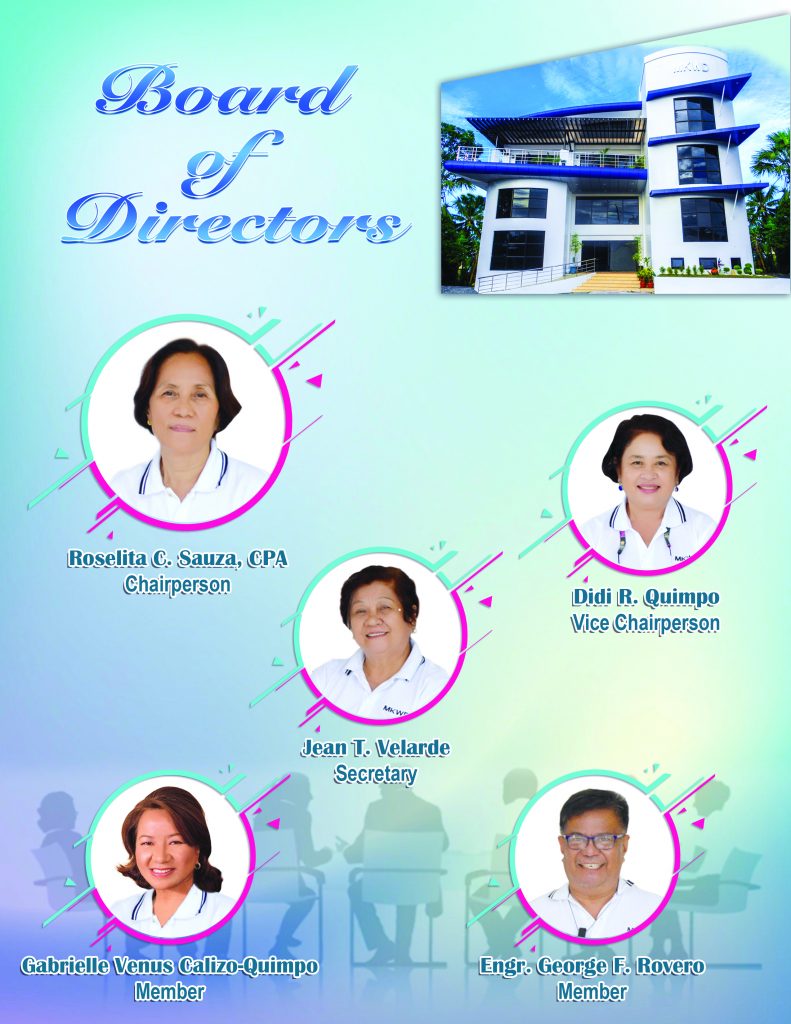 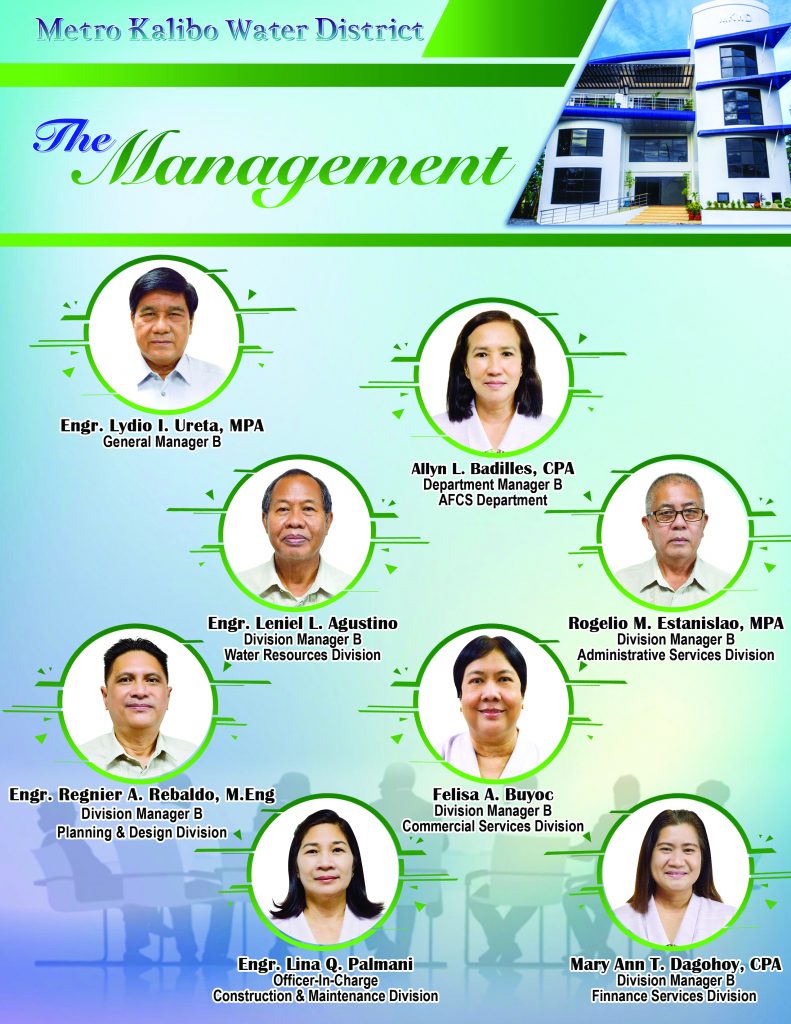 The MKWD vision was established and written in this manner:

Metro Kalibo Water District, will be nationally recognized as a premier, safe water provider and waste water processor while taking care to preserve the environment.

To attain the vision, the MKWD mission is as follows:

The Metro Kalibo Water District provides affordable safe water for all at all times.

In support of the vision and mission, MKWD commit to inculcate the following shared values: 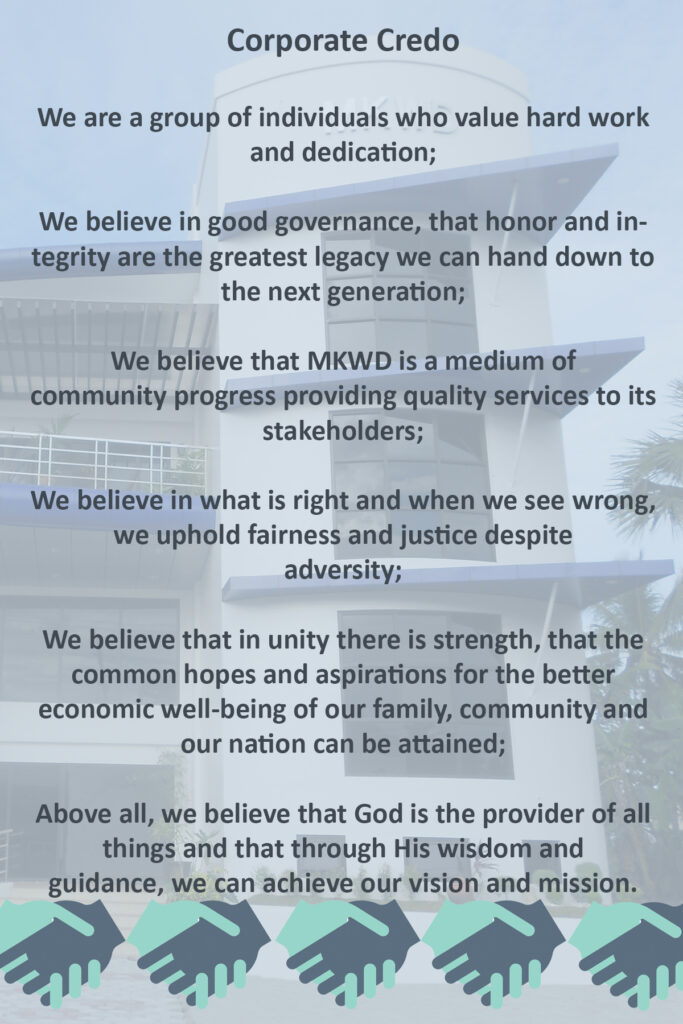 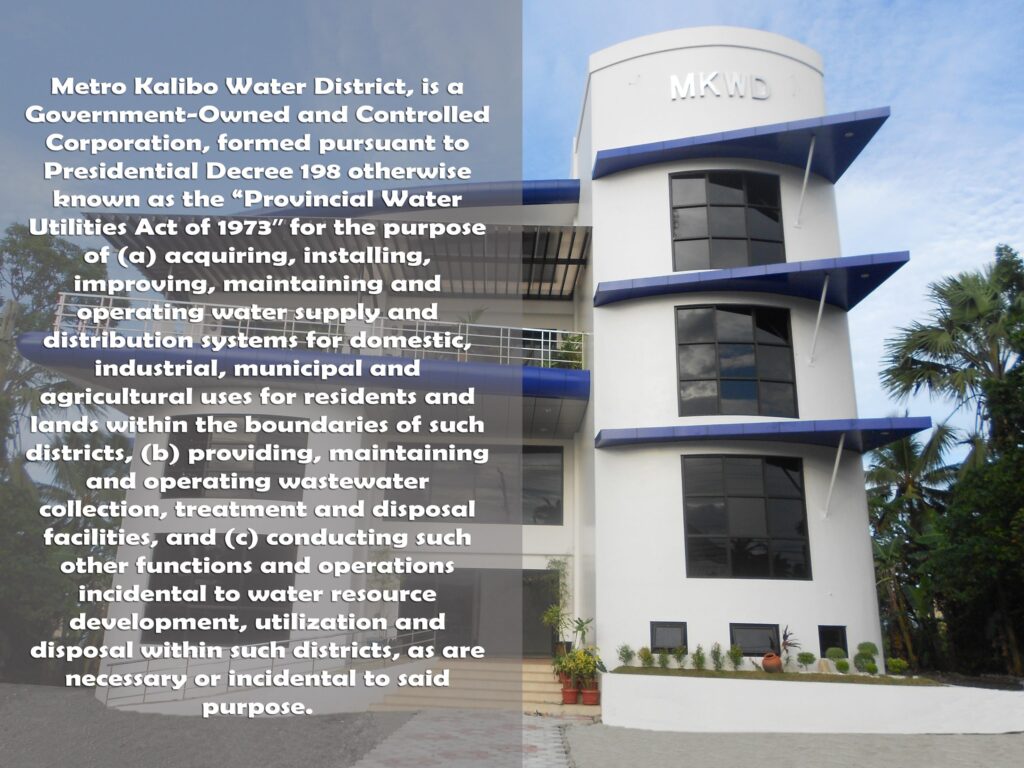 Have you tried our Online Services yet?

Land Bank of the Philippines